Shanna James here, updating you on my lil handsome man!
I know I’ve said this before but I can’t say enough how in love I am with my boy…he’s the best dog I’ve ever known (I may be biased but…). If Oliver were to get a sibling it’s not a question in my mind that they’d be from Rock Steady. He is the sweetest dog and everyone loves to tell me (as if I don’t already know 🙂 ). I don’t think he’s met a person who hasn’t loved him. He’s amazing with people of all shapes and sizes, including children and those in wheelchairs. At a year old, I honestly forget he’s even a puppy sometimes…he’s just so quick to pick things up. Right now he loves chasing birds at the bark park (we’ll catch one someday…), playing fetch, and squeaking toys nonstop. As he gets older and we refine our obedience I’d love to get him involved in therapy. Again, thank you so much for what you do. I had an extremely hard year and I’m not sure what I would have done without my orange ray of sunshine. We’ve both done a lot of growing together and I’ve never loved someone as much as I love this dog. He’s my entire world. I can’t wait to spend so many more years with him 🙂 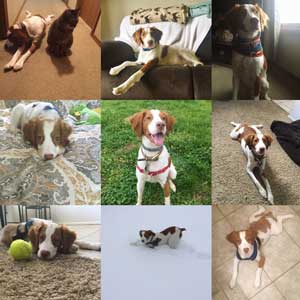 I thought I would send you an email and bring you up to date on Cooper. I cannot begin to express my sincere appreciation for such a fine dog. Cooper has spent most of the last 7 months with me on a daily basis. He behaves with such gracious manners and is calm beyond belief. He has become the club mascot and the guys look forward to seeing him every day. He loves to greet everyone who comes through the door, regardless if he has met them before or not. The most wonderful house dog and companion a person could want. He sleeps tight against me every night and does not let me out of his sight on most occasions. His obedience is remarkable and he listens so well it is mind boggling at times.
Now to hunting. We went to Elk county the first week of Pheasant season with my friend and his two Brittanie’s. Cooper preformed well for his first trip afield and I shot one bird over him while I missed two. He stayed close to me and did a really good job for a new puppy. We have hunted additional days at Blue Marsh and he continues to progress. As a matter of fact he made his first retrieve last Thursday. My hunting partners dog flushed the bird and Glenn shot it. I marked where it went down and to our total amazement Cooper made the retrieve. He brought the bird about 50 yards directly to me and he was as proud as a Peacock. Priceless, as we did not expect that to happen until next year. A proud poppa as well!!
It is with much gratitude that my wife and I say thank you from the bottom of our hearts for such a wonderful dog. I suppose the good Lord meant it to be. Hope you and your family have a wonderful Thanksgiving and a very Merry Christmas. If I get up your way I will stop by and bring Cooper for a visit! 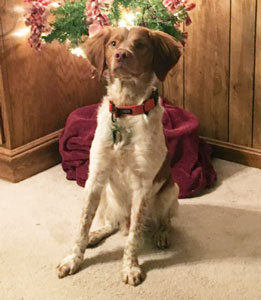 L.C. picked up everything very quickly this past year and has been a treat to train. Last week I took her to a preserve and she did well, pointed 6 birds and retrieved 3 of them. It was really fun! I’ve had her out for Grouse and Woodcock and although we didn’t find any birds, she was under control the whole time. (approx.1 1/2 hours) She responds to the whistle and direction commands. She still has her moments in the house but is absolutely a sweet little pup. I couldn’t be happier with her.

Thanks so much,
Dick & Judy Smith
Roscoe, NY
darbee1@juno.com 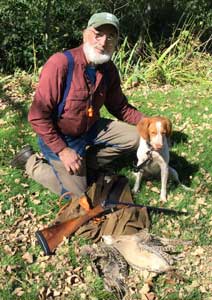 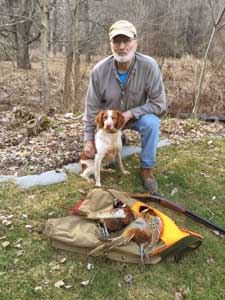 Just wanted to give you an update on Louie, or as we call him when he is bad, Louis. He is doing great, he loves being outside and chewing on his pizza toy. He’s over having accidents in the house, but loves chewing things with his puppy teeth. He sleeps through the nights, and loves afternoon naps with me. He has alot of toys, but really prefers chewing empty cardboard boxes to our disapproval. He is a joy to have and play with, and we are beyond blessed with him. 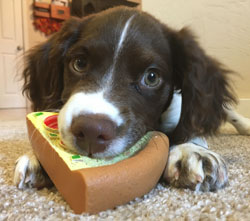 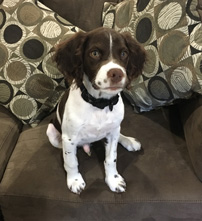 Cali (the girls picked a name) is settled in very well. Did great on the ride home. She is awesome. Her and Russ are getting along great and playing well together sharing toys and bones. Couldn’t wait to put her on wings so I went out this morning with a fresh Pheasant wing on a stick and she had a blast. She is fearless. Thank you so much for both of them. Great dogs. You guys are the best. 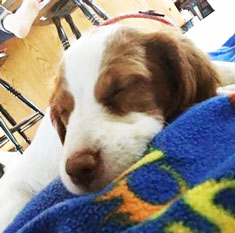 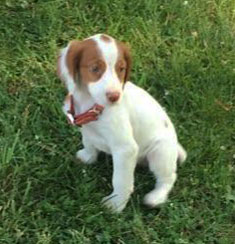 Today was opening day and Remy did great for his first time actually hunting. He tracked and pointed 4 pheasants,absolutely amazing to see the light come on after all summer training. He is very methodical and close working and looks great in the process. After chasing a lab for 10 years it is such a pleasure to take a slow walk behind such a great dog. Thanks again for everything. 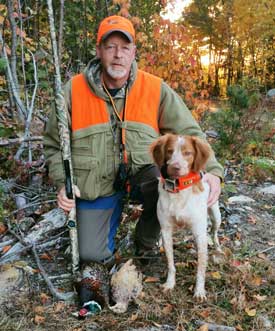 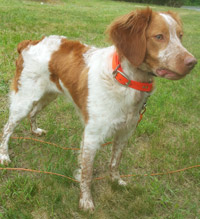 Just wanted to let you know little Bernadette slept the whole 4 hour trip back to her forever home with Ejay and myself! She did so well and she certainly has a very sweet disposition. We are madly in love! Also, she is very well behaved with the cats! We got really lucky because they seem very curious with one another, very surprised to witness sniffing not swatting! Thank you again so much for giving us this incredible gift, she fits right in and already makes our home and hearts feel whole!! We will definitely keep you updated with her, the below picture is the actual progression of her passing out! Too cute not to share 🙂

All the best!!
-Ali and Ejay,
Pittsburgh PA
ajcoppo1086@icloud.com 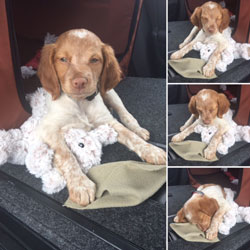 Wanted to share with you Beau’s picture he is now Rock Steady’s Nitro Beau CD, (Champion Dog) along with his agility titles. He finished up out at Clarion this weekend out of a possible score of 200, he received a 195, 190, and today a 180 he did not like the man we had for a judge he was to jerky and followed us way to close on the healing but I am very proud of him. Now on to Open for his CDX and also his rally titles. Here is a picture. 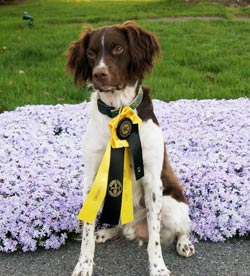 Peggy, from the Maddie’s litter two years ago, won first place at our first obedience trial yesterday! We had the highest score of the day in the whole Novice division. She did a great job. Afterwards we went over to see the Brittanys doing conformation and they were all excited by her, though she’s definitely more field-ready than beauty pageant ready. She’s a sweetie and we are so happy with her! 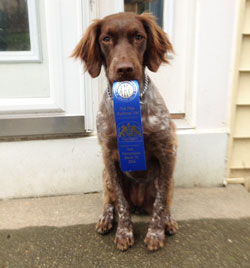 I got Cooper from u in Feb 2014. I just had to tell you this story. Yesterday I took Cooper out pheasant hunting for the first time this year. He did great and bagged the first bird of the year. We stI’ll have work to do but all in all for a 1 yr old dog on opening day he did great. The real story starts when we got home. Almost instantly I got the flu. I slept from 6-8 in the evening and from 9pm-11am this morning and Cooper literally never left my side. just laid right next to me. Didn’t eat, drink, go potty, nothing. Talk about a loyal companion. My wife was absolutely amazed, she said she tried to bribe him out of the bed but Cooper wasn’t having it. Thank you so much for raising such great dogs!!!

I just wanted to give you an update on how Ammo was doing. He is from Buster and Gretchen’s litter from September 2015. He is surprisingly calm for a Brittany. He only had trouble sleeping the first night but every night after that he has had absolutely no trouble, which is amazing! He is unbelievably easy to train and his trainers can’t believe how calm and obedient he is. He loves going to the dog park and playing with his many friends. People always ask where we got him and of course we give out your name! He is an amazing dog with the best personality. He is almost 6 months and already weighs 32 lbs! 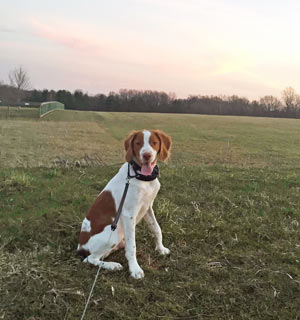 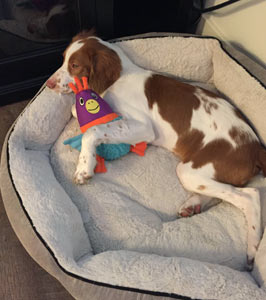